Skip to content
HomeEvents2019Allied Attempts to Cover Nazi Crimes on Film. What Questions can the Footage Answer?
The international workshop invites experts from various fields to discuss the potential of Allied film footage of liberated camps for studying the history of the Holocaust.

There is hardly any filmic evidence of Nazi concentration and death camps as they were before their SS personnel fled and Allied troops arrived. The SS obeyed the strict prohibitions against filming what went on inside, and the exception — the relatively little footage that was permitted to be shot – was intended to deceive viewers about the true nature of the camps. Allied footage of liberated camps is therefore often used, for example in documentary films and at memorial sites, to fill this void in the visual record. But can the footage really do that? What does it actually include? What exactly do these images show (and what do they not show)? And, after decades of academic research and public history, what can they still tell today’s viewers, despite their having never been the intended audience?
These topics are discussed by team members of the Horizon 2020 project Visual History of the Holocaust and the following external experts:

To this day, our ideas of the extent and cruelty of Nazi crimes are mainly shaped by images of the concentration camps. These images are supposed to bear visual witness to Nazi atrocities, despite the fact that most of them were shot by Allied cameramen during or shortly after liberation, when SS personnel had already left the crime scenes. There are almost no images of what went on before Allied forces arrived, for the Nazis officially forbade photographs and film in work, concentration and death camps. The little material that was produced despite the prohibition was meant to obscure the real situation and deceive its audiences. Therefore, documentary films and memorial sites often draw on images produced during or after liberation to illustrate Nazi atrocities.

But what can these images actually tell us about Nazi crimes in general and the Holocaust in particular? This was the main question addressed by the international workshop Allied Attempts to Cover Nazi Crimes on Film, organized by the Zentrum für Medien und Interaktivität (Media and History section) of the Justus Liebig University, Giessen, and participants in the EU project Visual History of the Holocaust: Rethinking Curation in the Digital Age (VHH). The workshop brought together experts from different fields, including historians, film scholars, archivists and education specialists, to discuss the value of this so-called “liberation footage” for research into the Holocaust. Ulrike Weckel, Anja Horstmann and Ulrike Koppermann put together a diverse programme that addressed questions about the production, intended purpose and reception of the footage.

The first panel, entitled ‘The Iconic and Beyond’, opened with a presentation by Ulrike Koppermann (Giessen) on Cornelia Brink’s concept of secular icons. Koppermann presented a series of photographs from the camps and asked participants to consider carefully why some of the images had become iconic while others had remained unknown. Keeping in mind that because of their familiarity most iconic images are no longer analysed, participants discussed the images’ modes of representation, the specific historic conditions of their production and photographers’ intentions. It became obvious that, although Allied cameramen were ordered to collect visual evidence of Nazi crimes, they staged or at least arranged many of their shots.

Then Valérie Pozner and Irina Tcherneva (Paris) discussed their research on film material produced by Soviet military between 1941 and 1945, including edited films, such as Majdanek (USSR, 1944) and Auschwitz(USSR, 1945), and unedited footage that was not made public, e.g., film remnants, outtakes and censored material. They discussed their observations of recurring motifs, such as German soldiers’ mutilation of corpses, most of them civilians; destruction of buildings, especially churches, and rituals of mourning, in which close ups of grieving faces portray the intimacy between mourners and the dead. Pozner and Tcherneva pointed out that the footage presents many destroyed churches but no destroyed synagogues and that, strikingly, images of Jewish objects are found only in the outtakes, not in the finished films.

The panel ended with a presentation by Ingo Zechner (Vienna) about the unknown, non-iconic images found in films that were not intended for public use. Zechner presented footage shot at the concentration camps in Ebensee, Dachau, Buchenwald and Falkenau by professional filmmakers, such as George Stevens and Samuel Fuller, with amateur equipment. They combined shots of survivors, murdered inmates and SS guards who had been beaten to death with images not included in films made for the general public, such as of off-duty Allied soldiers relaxing and having fun. One clip shows how naked corpses were dressed for burial, a theme found in no films for public consumption.

The second panel, entitled ‘Liberation Footage as Visual History of the Holocaust’, centred on the question of whether images taken after liberation can tell us anything about what went on inside the camps before Allied forces arrived. Anja Horstmann (Giessen) presented sequences of the American atrocity film Nazi Concentration Camps (US, 1945), which was screened during the International Military Tribunal in Nuremberg in 1945-1946. She asked participants to consider whether the footage was a visual source for the final phase of the camps. During the discussion, it became apparent that, although the images were supposed to document the situation in the camps, they tell us more about how Allied soldiers portrayed Nazi crimes, i.e., the motifs they selected and modes of representation they employed in order to tell a coherent story.

The third panel, ‘What did Liberation look like?’, began the second day of the workshop. On the basis of various film sequences, including footage that was too unrealistic to be used in compilation films, Ulrike Weckel (Giessen) discussed how Allied cameramen wanted to convey that, despite all their shocking discoveries in the camps, they had liberated the surviving inmates. Unedited footage reveals that Soviet cameramen staged a jubilant liberation scene at the gate of Stammlager Auschwitz I with survivors, pressing against it, smiling and waving their caps to greet the soldiers of the Red Army whom they then embrace after the soldiers opened the gate for them. In light of the retakes’ different camera angles, it is likely that the survivors needed to perform their supposed liberation several times. The compiled Soviet atrocity films include no such scenes of jubilation. However, they do include staged scenes of inmates waiting behind a barbed wire fence for their liberators. This strategy of staging liberation shows that Soviet cameramen sought scenes to represent liberation in a way that would meet the expectations of audiences. As Weckel demonstrated, the end of SS rule was not only depicted via images of survivors awaiting or embracing their liberators. Most of the Allied documentaries also include images of Allied soldiers caring for inmates and, when possible, arrested camp personnel. For example, the British film German Concentration Camp Factual Survey (UK, 1945/2014) depicts guards from Bergen Belsen being forced to bury typhus-infected corpses with their bare hands

Roland Leikauf (Gedenkstätte Hadamar) devoted the panel’s second presentation to footage from the euthanasia centre in Hadamar. The footage was included in several American atrocity films. It was shot 12 days after liberation and depicts the meticulous work of American war-crimes investigators medically examining survivors, exhuming bodies, conducting autopsies and interrogating former members of the administration and medical staff.

The final panel, ‘Compiling the Footage and Showing Atrocity Films’, shifted the focus from the visual evidence of Nazi crimes to questions of montage and reception. In the first presentation, Ulrike Weckel discussed the narrative structure of Allied atrocity films, presenting excerpts from Die Todesmühlen (US, 1945), Deutschland erwache (US, 1945) and Kinodokumenty o zverstvakh nemetsko-fashistskikh zakhvatchikov (USSR, 1945). Deutschland erwache, for example, was shown to German prisoners of war, and it contains several scenes of idyllic German landscapes, German culture and German industry, which the producers probably included to convince its audience that Americans went to war against the Nazis, not the German people. Efforts to anticipate Germans’ responses are also evident in Die Todesmühlen. For example, the narrator explains that the Nazis persecuted and killed people of all religious faiths and most political persuasions from across Europe, but he mentions Jews only in passing. The filmmakers probably expected that Germans were still hostile towards Jews and would reject Allied reproaches for persecuting and killing them. In general, the Western Allies avoided highlighting the persecution and mass murder of Jews in films intended for German audiences in order to maximize their re-educational impact. Die Todesmühlen ends with a parallel montage of images drawn from Nazi propaganda of enthusiastic crowds hailing Hitler and images of horrified Germans forced to look at the victims of a death march. The montage reinforces the narrator’s argument that all who supported the Nazi regime are responsible, despite their claim not to have known about the camps.

The last presentation concerned the reception of atrocity films and photographs. Ulrike Koppermann, Anja Horstmann and Anika Binsch (Giessen) invited participants to consider the power of such images to give viewers a better understanding of Nazi horror. The discussion was based on excerpts from the writings of very different authors – Hannah Arendt (philosopher), Susan Sontag (photography theorist), Robert Leibbrand (politician and survivor), Jorge Semprún (writer and survivor) and Peter Weiss (writer) – who wrote about what they experienced when they first saw images from the concentration camps. Semprún’s argument – that the images are visual evidence of the atrocities, but, at the same time, they are silent and explain nothing about what they reveal – was discussed intensely in regard to the common practice of documentary filmmakers and education specialists working at memorial sites and museums of making use of such images.

The workshop’s final event was a public screening at Kinocenter Gießen, the local movie theatre, of German Concentration Camps Factual Survey, produced by the British Ministry of Information in 1945/1946 and restored by film scholars at the Imperial War Museum in 2014. Ulrike Weckel moderated the audience discussion that followed. Audience members agreed that it was difficult to find an adequate language to speak about camp images. They may have been confronted with the paradox that Semprún, a survivor of Buchenwald, wrote about in Literature or Life (1997) (originally, L’Écriture ou la Vie, 1994):

Yet although the newsreel footage confirmed the truth of the actual experience […], at the same time these images underlined the exasperating difficulty of transmitting this truth, of making it, if not absolutely clear, at least communicable. […] Even though they showed the naked obscenity, the physical deterioration, the grim destruction of death, the images, in fact were silent. […] What was really needed was commentary on the images, to decipher them, to situate them not only in a historical context but within a continuity of emotions (p. 200f.).

Semprún’s remarks summarize the aim of the workshop, which brought scholars from different fields and different countries together to decipher, situate and contextualize these images in order to make them less silent. 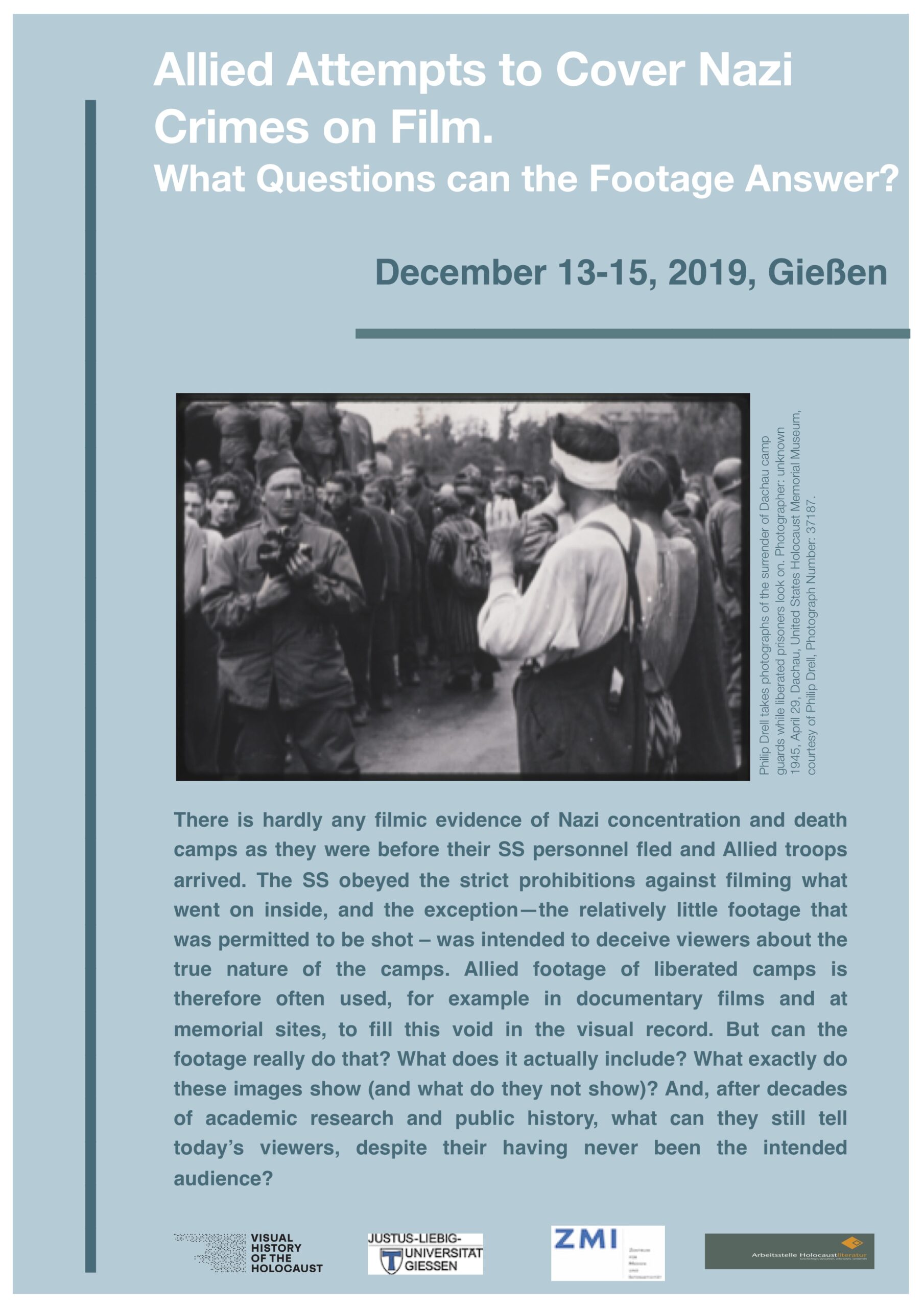